This image has been floating around the internet for a while, and I wondered about the story behind it. I love this giant dining room set. 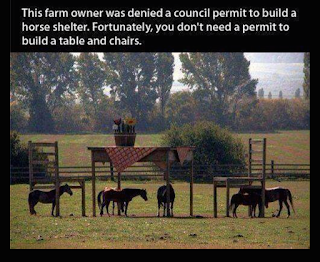 Let's face it - that's one HUGE set of table and chairs! Reminds me of this: 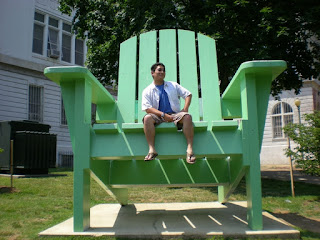 With a little poking around, I managed to find this on SNOPES. 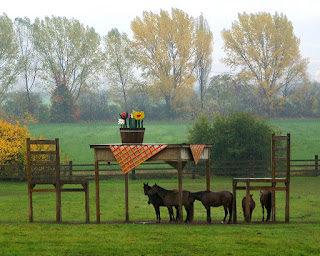 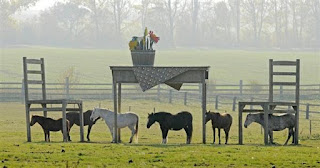 The farmer made this giant table and chairs after being refused permission to build a shelter for his horses! No permission was required for the giant furniture!

Origins:   Photographs of these horses standing in a meadow beneath an outsized table and chairs have been circulating on the Internet since 2003, typically accompanied by the claim that the unusually large furniture was constructed by a farmer as a way of working around a local ordinance that prohibited him from building a shelter for the animals. Although the photographs are real, the claim about the giant furnishings' having originated as a way of skirting the law is a bit of fiction: the structures were built to serve the dual purpose of providing some shelter for the equines and serving as a visual advertisement for their owner's business.

When Time magazine featured a photograph of this tableau in June 2003, it was captioned thusly:
Three horses try to hide from the rain under an oversized table and chair in a pasture near Doellstaedt, eastern Germany. The huge garden furniture was installed by a local wood merchant to promote his products.

Likewise, several photographs of the same scene which were snapped by an Associated Press photographer in July 2004 bore similar captions:
Two horses stand under a gigantic table and chair during intense rainfalls in Doellstaedt near Erfurt, eastern Germany, on Wednesday, July 24, 2002. Timber merchant Jens Braun built the unusual furniture as a shelter for his horses.

Several additional pictures of the giant-sized pieces of furniture (with and without horses) and an overhead aerial view of the structures can be seen here.

There's a huge dresser in High Point, North Carolina. I haven't seen it in person, but have a photo somewhere of my mother standing in front of it. (just google and you'll see it, quite cool!)

I did Google it... you're right! Awesome. I am working on another blogpost about large scale furniture - you've started a trend!

there really is a large table and chair in a field. the state is Iowa USA
the town Solon. NOT Germany.

Looking for accuracy? You need this!